The site of the Churchyard is an ancient one and was at one time occupied by a 13th century Franciscan Monastery. They were an order of friars founded by St.Francis of Assisi (1182-1226) in 1209. They were sometimes known as the “Grey Friars”. The south side of the Churchyard is still to this day referred to as the Nun’s Garden.
There have been burials in the ground surrounding the Church from very early times. The oldest gravestone is dated 1626 and reads “Here lyeth the body of Margaret Wilson, wife of Donnell Savage, who departed this life the 24 April 1626”.
Other notable early graves are those of Clergy from other denominations who served in the Lisburn area. 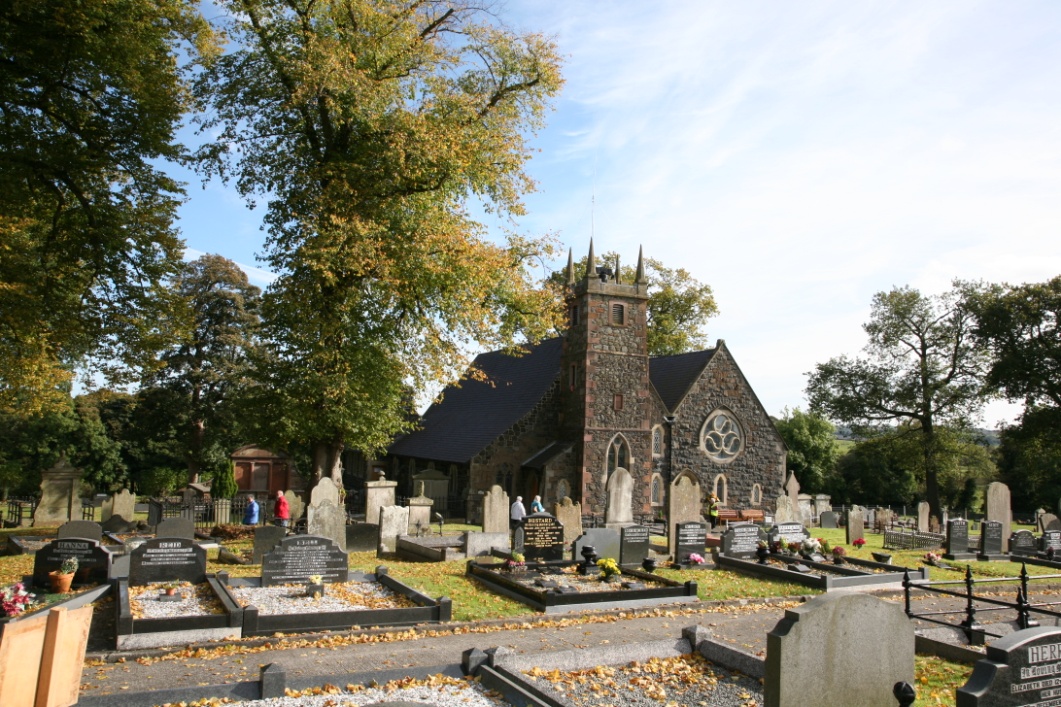 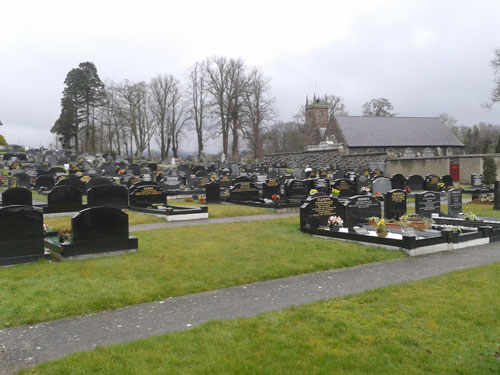 The churchyard is the resting place of many of the notable families who were instrumental in the development of the Linen Industry in Lambeg and Lisburn.
Wolfenden. The Wolfenden family who were Huguenots established themselves in Lambeg in the 17th century when Abraham Wolfenden came to Ireland, probably from the low countries. A paper mill, which became the largest in the North of Ireland, was set up on the Co.Down side of Lambeg . They later set up a mill on the Co.Antrim side for the production of blankets. The family were later involved in the manufacture of linen. The family graves occupy a large enclosure headed by a large red sandstone monument, which bears the date of 1693.
A stone in the enclosure carries the Armorial Bearings of the Wolfendens
Barbour. Of all the names closely associated with Lambeg Church, that of Barbour is perhaps the best known.  William Barbour, established at Hilden in 1823,  the linen thread business, formerly started by his father on the Co.Down side of Lisburn.  John Doherty Barbour (1824-1901) eldest son, married Elizabeth Law Milne, they had 4 sons and 2 daughters. Elizabeth married Robert Airth Richardson. Helen the younger daughter married Thomas Andrews, Chief Designer of the Titanic and who was lost with the ship. They were married in Lambeg Parish Church in June 1908. Frank Barbour the eldest son died at sea and was buried at sea. He was a renowned racehorse owner. The third son, Harold Adrian Milne Barbour was involved with the co-Operative movement and was President of the Lisburn Co-Operative Society.His ashes are interred here. Sir John Milne Barbour was the second son and is most closely associated with Hilden Mill. It was mostly through his efforts that the Linen Thread Company and William Barbour & Sons Ltd developed into the huge and prosperous business that it became. He was very involved in the politics of the country and served in Ministerial capacities in the Government of Northern Ireland. He married his cousin, Eliza Barbour, the daughter of Robert Barbour of Paterson, New Jersey. They had 3 daughters and 1 son, John Doherty Barbour who was killed in a flying accident in 1937. Sir John Milne Barbour died in 1951 and is buried here.
Richardson. The Richardsons, in common with other families, fled from religious persecution in Scotland and settled in Lisburn around 1680. With their knowledge of the linen and cotton industries they began the manufacture of these materials in Lisburn and Belfast.
There are also the graves of Ministers of Religion from various denominations who served in local Parishes.
Rev. John Johnson and his wife Dorothea. The Rev.Johnson was a Methodist preacher in the chapel in Lisburn (now the Christian Workers Hall in Market Street) and his wife was influential in promoting Methodism in the area. He died in 1803 aged 78yrs and his wife died in 1817 aged 84yrs.
Rev.John Bredin, a Methodist preacher who was closely associated with John Wesley. He preached in many places throughout the country, including Lisburn and Belfast. He died in 1819 aged 82yrs.
These graves are on the North side of the Church
Rev.Magee, Parish Priest of Derriaghy Roman Catholic Church which he served for close to 50yrs. He died and was buried here in 1730.
Rev.John Mullan. Parish Priest of Derriaghy Roman Catholic Church. He succeeded Rev.Magee and served his parish for almost 39 yrs. He died 15th Sept. 1772.
These graves are on the South side of the Churchyard
Sadly the tombstone which once marked the graves of the Roman Catholic clergy have long gone but the inscriptions, along with many others, were recorded by William Cassidy M.R.S.A.I in 1937 in Lambeg Churchyard, Inscriptions on Old Tombstones (1626-1937) to whom we must be eternally grateful for his foresight in preserving inscriptions which were being lost through the erosion of weather and time.
Rev. Saumarez Dubourdieu. (1716-1812)A Huguenot who was for 45yrs Minister of the French Church in Lisburn. This Church stood on the site of the Old Town Hall in Castle Street. He was an officiating clergyman of Lambeg Parish for 50yrs  and Vicar of the Parish of Glenavy. In 1756 he established, and was Master of, the Classical School in Lisburn. He died in 1812 aged 96yrs and is grave is under a stone slab with an extensive inscription.
This grave can be found on the South side of the Churchyard.
Rev.Benjamin Banks, Chancellor of Connor  was Rector of  Lambeg Parish from 1877 until 1929. His grave which lies in the family plot on the West side of the Churchyard bears the inscription, “Benjamin Banks, Died 12th September 1934, Aged 84 Years, Rector of this Parish 1877-1929
Braithwaite. Originally a Huguenot family. This Grave is on the North side of the Churchyard
The Churchyard was extended in 1921 through a gift of land from Sir Milne Barbour. Over one and a half acres were added and new paths laid. New entrance gates were erected in 1924 and later a second entrance with a broad avenue leading to the church was made. There are many old graves and gravestones in the Churchyard, the oldest, the grave of Margaret Willson,  on the North side, dating to 1626.
Essay Pelan.  There is a very romantic story attached to this grave. Her lover emigrated to America to seek his fortune so that he could share his life with Essay. While he was away someone invented the story that he had found a new love and Essay believed it though it was quite untrue. When her lover returned to marry her he found that Eassay had died of a broken heart at the age of 21years and was buried here in Lambeg Churchyard. Tradition has it that she was buried in her bridal dress and her bridal wreath was laid on her grave. The stone is in the form of a broken column, a symbol of mortality and the transition from life to a heavenly existence.